How brands can embrace pessimism following the COP26 conference in Glasgow

The upbeat words and images brands are using around the climate crisis are increasingly out of sync with the public mood. It's time for marketers and agencies to embrace a more activist stance while still conveying optimism.

Described by John Kerry, the US climate envoy and former secretary of state, as the "last, best hope for the world" to stop catastrophic climate change, the COP26 conference in Glasgow instead seems to have generated a distinctly pessimistic mood. Without the leaders of countries accounting for over 40% of global emissions, or the voices of those most threatened by the impact of climate change, hope is fading fast that anything near the massive commitments necessary to avert climate change are possible from the conference.

Differing visual approaches to COP26 from government and civil society

For the many people increasingly alarmed by inaction over climate change, whose numbers have been swelled by the proliferation of activist movements in recent years, this is a bitter disappointment, but not entirely surprising. The cultural depictions of the environmentalist movement have begun to combine increasing pessimistic visions with imagery of crisis, with constant emphasis on the inadequacy of global responses and the impact of climate change. Extinction Rebellion has in its very name a premonition of doom. Greta Thunberg, the young Swedish climate activist, is perhaps the world’s most famous environmentalist, and pessimist. The increasingly mainstream concept of climate justice contains within it an intrinsic pessimism that those solutions to climate change currently pursued will be weaponised to punish the marginalised. Visually, the palette of environmental movements has changed from bright, vibrant greens to a broader spectrum of darker colours especially visceral shades of red, and increasingly angular lines. Notably, this has begun to be combined with vibrant, almost psychedelic colour, distinct from traditional earthy tones of the movement. A clash that conveys the energy of a moment of crisis. 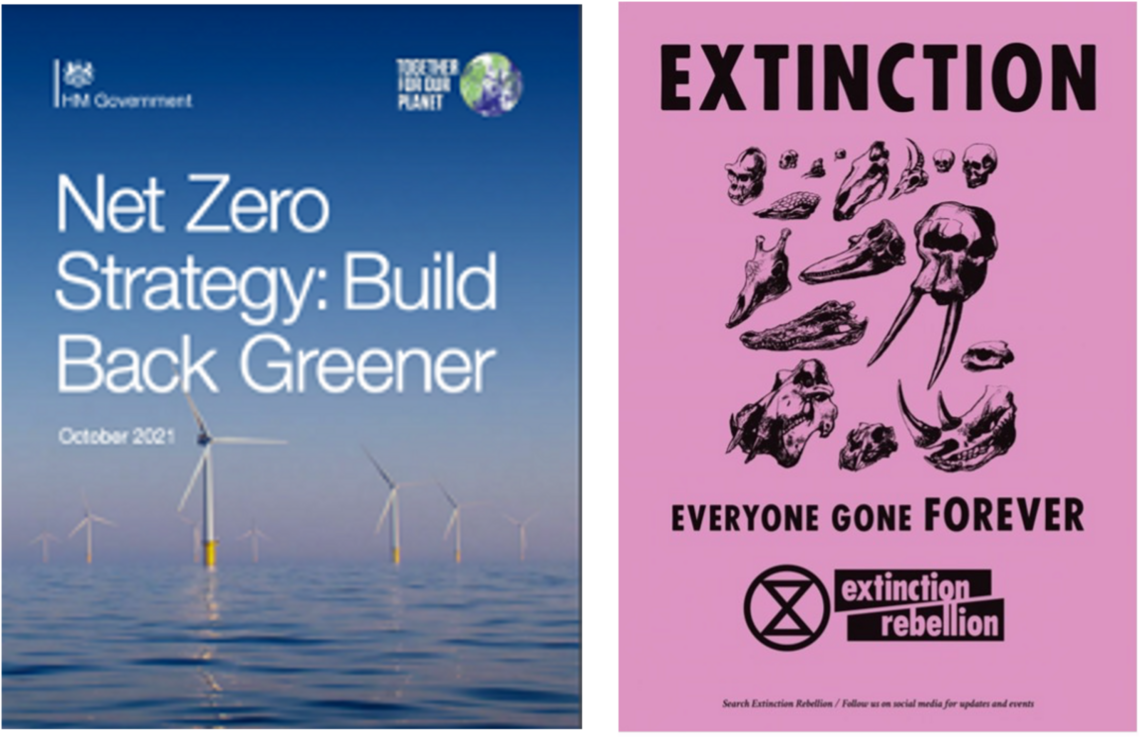 Contrasting the optimism of government lines with activist pessimism

Meanwhile, most brands, driven by stakeholder appetite to engage increasingly on climate issues, remain distinctly upbeat. From Proctor and Gamble promising on Earth Day that ‘small actions can make a world of difference’, to Apple TV’s positive account of a year of lockdown ‘The Year the Earth Changed’, few brands beyond the ever-progressive Patagonia seem keen to embrace gloom. Governments meanwhile, have pivoted from largely ignoring the climate crisis to, in some cases, ebullient optimism around the potential for, in the words of Boris Johnson ‘have cake, eat cake’ green growth. Visually, this approach has been accompanied by soothing, naturalistic colours and, especially in the UK, the ever-present image of the windmill.

This polarization of messaging around climate change begs the question - which approach is the right approach? That is to say, which approach can galvanise action across countries, sectors and cultures to enact the massive changes necessary to prevent catastrophe. Where pessimism can breed despondency, optimism can fuel complacency. Is optimism more suitable in some periods, and pessimism others, or is there benefit in combining the two - a ‘pessimism of the intellect and optimism of the will’ to quote Antoni Gramsci?

Behavioural scientific approaches are inconclusive over which messaging provokes individuals into more action. Where a 2020 study found pessimistic messaging increases emotional arousal and, as a consequence, risk perception amongst respondents on the issue of climate, https://www.nature.com/articles/s41599-020-00574-z , findings from 2019 suggest the opposite, that ‘constructive hope’ should form the core of crisis messaging. https://www.frontiersin.org/articles/10.3389/fcomm.2019.00020/full

However, Focussing on the impact of optimism and pessimism amongst individuals in controlled contexts captures only one component of the broader question. Zooming out, a cultural perspective on the question yields a range of possibilities. Clearly, both impulses exist culturally at any one time, and are somewhat symbiotic. Pessimistic activists will always complain not enough is being done, prompting policymakers and brands to make sufficient change fuelled by their irrepressible optimism. It does not follow, however, that these two impulses are at all times equally balanced, nor that they should be. Sociologists including Oliver Bennett identify periods of pessimism in intellectual circles, eventually percolating into general public discourse eventually driving demands for substantial change. Change is then implemented in a following period of optimistic construction as can be seen throughout history.

Going into COP26, organizations would be wise to recognise the power of pessimism in the current moment. If pessimism and optimism wax and wane, those seeking to drive change need to assess both where culture is currently, where it is going, and whether they want to lead the charge or follow the pack. Despite the well noted impact focus of millennials, the chipper optimism of Johnson and corporates seems premature. Although the perception gap between the powerful and the people has narrowed in terms of perception of climate change, tackling it has begun to be associated with the broader challenge of inequality, and historically low confidence in capitalism. Brands in particular need to recognise a spirit of scepticism towards them. Optimistic positioning on climate change risks a lack of credibility, while pessimistic positioning risks inauthenticity in emulating the voice of activist movements.

A more constructive approach for brands joining the struggle against climate change is to borrow from the imagery of activists and embody ‘action pessimism’, evoking realism while avoiding an image of disempowerment. Some activist groups within the movement have begun to combine a pessimistic colour palette with the energy of explosive lines and shapes.

By calling for action on the challenging, systemic issues underpinning climate change, rather than offering optimistic solutions to smaller problems, brands can match the cultural mood, while positioning themselves for a more optimistic future. Pact Coffee, for instance, recently launched the ‘Make a Pact’ campaign, centring not on unfairness in coffee supply chains, but the bold, pessimistic statement that ‘coffee is broken’ in caps font. E.ON meanwhile has produced a campaign featuring executives standing on a melting glacier, a profoundly pessimistic location, in a readiness for action. In the context of COP26, brands must be ready to share in the potential disappointment of the public, while positioning themselves as an active player in addressing the ongoing climate challenge, today and in the future.

Tom Richardson is an associate at Quantum Consumer Solutions in London. A strategist with public, private and third sector experience, his work focusses on purpose, sustainability and behaviour change campaigns. 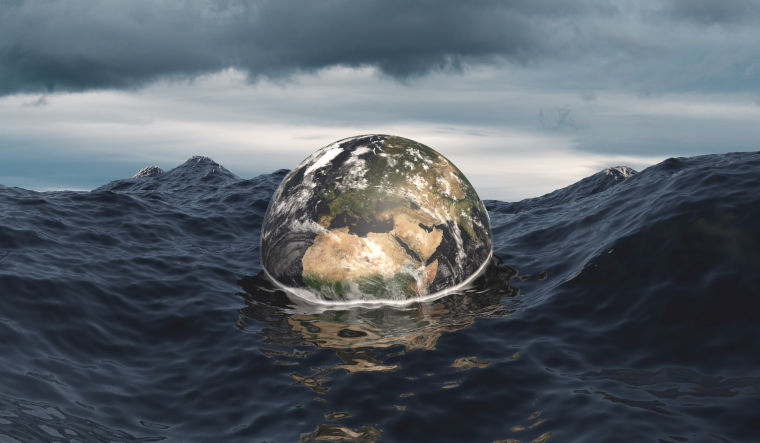 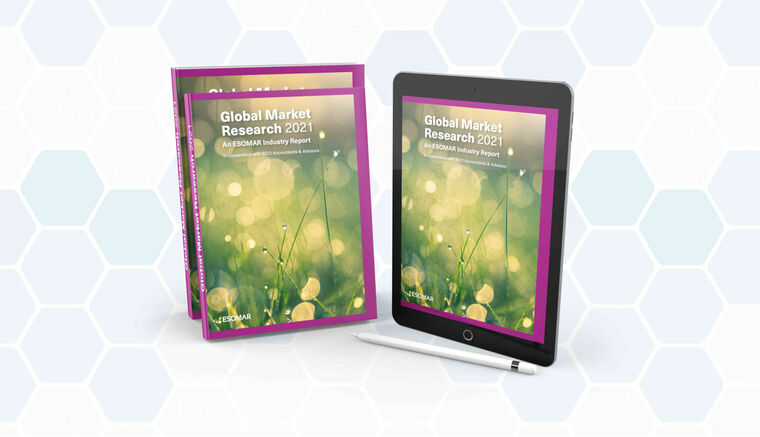