a 3-part series which will explore key applications of three well-known behaviour change frameworks and models. 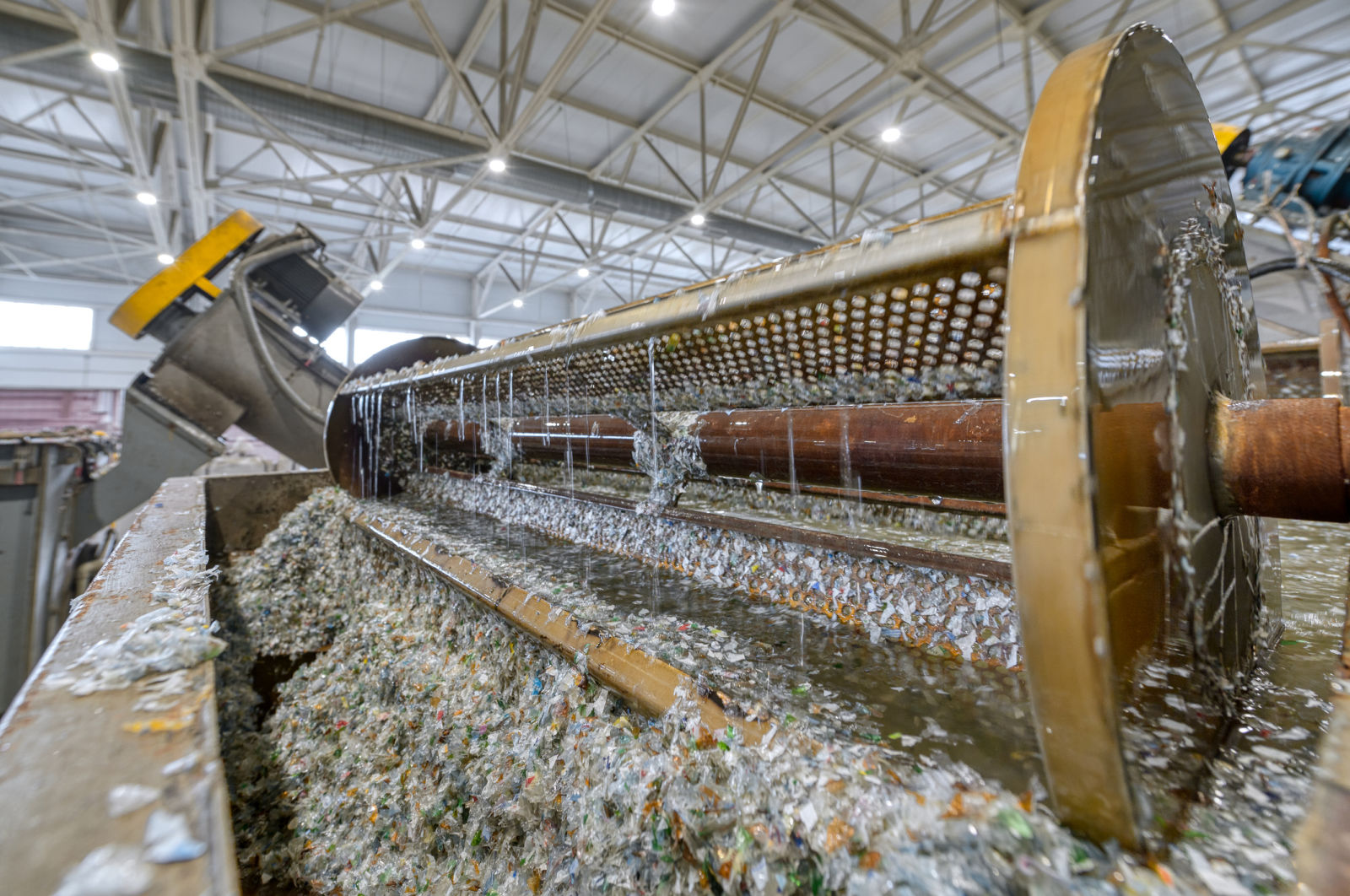 As described in the first article of this three-part series, changing others’ behaviour may often be difficult. However, there are opportunities to tackle behaviour change challenges in a rigorous, evidence-based way, by using behavioural theories, frameworks, and models. These are relevant across a wide range of scenarios and can be especially useful to those working in qualitative or quantitative market research.

This second article focuses specifically on behaviour change frameworks. Frameworks give an overall picture of possible courses of action that may be taken to influence behaviour, and this article describes in detail two well-known frameworks originally developed for UK Government. It also includes a wide variety of real-life illustrations of how they have been used to successfully change others’ behaviour.

The EAST framework was designed by the UK Behavioural Insights Team (AKA “Nudge unit”) and draws heavily on recent research in behavioural economics. The EAST framework suggests four potential courses of action to increase the likelihood of behaviour change. Each is summarised below, along with an illustration.

The first suggestion – the ‘E’ in EAST – is to make the target behaviour as easy as possible. This can be done in various ways, including harnessing the power of defaults, reducing the hassle factor of taking up a service or simplifying messages. For example, through automatic opt-in by default, enrolment in pensions in the UK grew from 55% of the eligible population in 2012 to 87% in 2018.

The second option EAST proposes is to make the intervention attractive (as denoted by the ‘A’ in EAST). This is based on the insight that we are more likely to do things our attention is drawn to. For example, when letters to non-payers of car tax included a picture of the offending vehicle, payment rates rose from 40% to 49%.

Third, EAST states that through social norms (the ‘S’ in EAST), referring to what most others do in a particular situation can effectively encourage people to do the same. For example, when people were told in letters from HMRC that most others pay their taxes on time, it significantly increased payment rates.

Finally, the likelihood of change is said to be increased by prompting people at a time (the ‘T’ in EAST) when they are most likely to be receptive – such as around life events when habits may already be disrupted. For example, students transferring from one university to another were better able to act on intentions to change habits.

In summary, EAST provides a simple, often cost-effective, evidence-based menu of options to help increase the likelihood of changing others’ behaviour. A wide range of successful interventions has incorporated one – or sometimes more than one – of the four courses of action described above.

A second UK government framework, again strongly rooted in behavioural economics, is MINDSPACE (see illustration below). Each letter in the framework refers to a behavioural, cognitive, or emotional effect that intervention designers can use to make their interventions more effective. 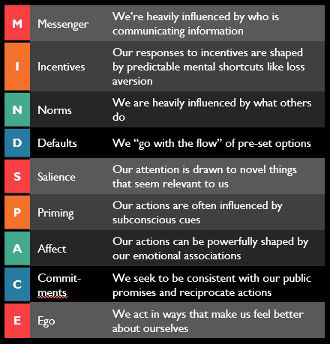 For example, as regards Messenger (M – see above), it has been shown that demographic and behavioural similarities between a “messenger” and a message recipient can improve intervention effectiveness.

MINDSPACE is a little more detailed than EAST – however, it works similarly. Through drawing on one or more of the effects above, MINDSPACE represents a second way to drive behaviour change.

Below are two examples of MINDSPACE in action.

First, levels of waste, along with environmental problems, are key challenges associated with the inappropriate discarding of plastic bags. To help reduce plastic bag usage, in 2015 England introduced a mandatory five-pence charge to customers for each single-use plastic bag taken from large stores. All age, gender, and income groups in England substantially reduced their plastic bag usage within one month of the charge being introduced. This approach incorporated the ‘I’ (Incentives) in MINDSPACE above – drawing on the insight that humans are much more motivated to avoid losses than to pursue gains of similar value.

In another example, two of the nine effects from MINDSPACE (Messenger – ‘M’, and Norms – ‘N’) were employed simultaneously. Here, the study authors wanted to see if prescriptions of antibiotics by GPs in England could be reduced. An intervention group received a message from the Chief Medical Officer (Messenger) stating the practice was prescribing at a higher rate than 80% of practices in the local area (Norms). A control group received nothing. The resulting prescribing rate was 127 per 1,000 people in the intervention group vs 131 in the control group. This was a highly statistically significant difference, representing an estimated 73,406 fewer antibiotic items dispensed.

Critique of EAST and MINDSPACE

However, MINDSPACE and EAST have sometimes been criticised. Below are three key reasons. First, neither is based on any particular theory (see previous article about the importance of theories). They have therefore been criticised for simply representing a set of disparate observations rather than properly explaining anything.

Second, both frameworks (especially EAST) may be narrow in their scope, drawing only on behavioural economics research. For example, neither considers whether or not attitudes or values might be an important driver of behaviour. Finally, there is doubt whether either can be used to tackle complex, longstanding challenges. For example, the illustrations above typically described one-off actions or only measured short-term (not long-term) impacts.

This article has described two well-known UK government frameworks alongside a variety of successful real-life illustrations. Both EAST and MINDSPACE present simple, often cost-effective, evidence-based menus of options to help increase the likelihood of changing others’ behaviour.

However, these two frameworks may not always be the most appropriate. The third and final article in this series will focus on behaviour change models. It will describe how their added rigour – particularly alongside primary or secondary research – can help to further increase the chances of behaviour change success.

This article series contains selected highlights from “Four frameworks and models to help drive behaviour change” – a new, introductory guide written by Activate Research which will be released on 7th February 2023. To pre-order a free copy go to https://www.activate-research.com/behavioural-models-guide 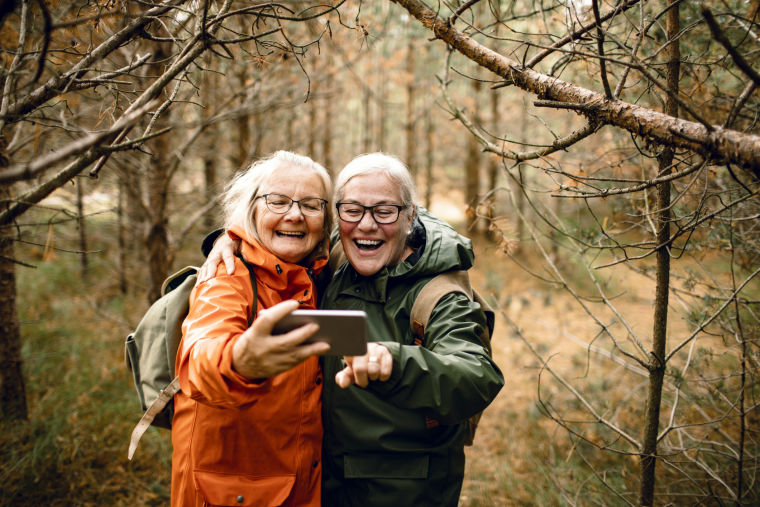 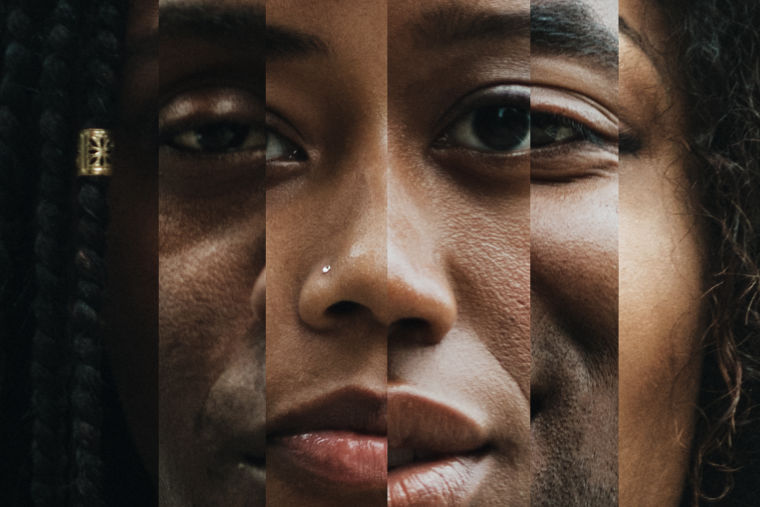