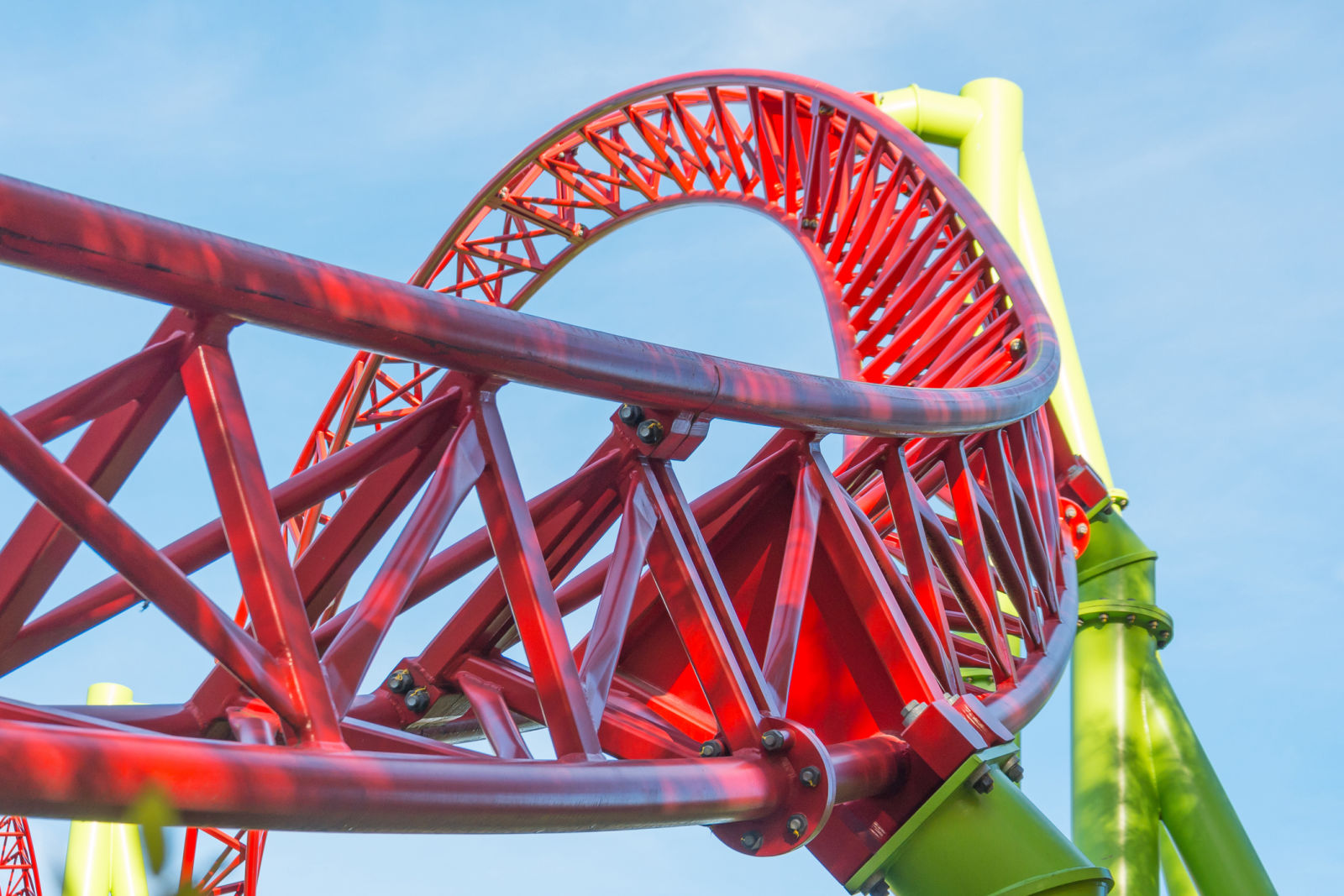 The roller coaster which began in 2020 with the propagation of an invisible enemy – the SARS-CoV-2 virus – continued into 2021 as governments, markets, and the population adjusted to a disease that, authorities predicted, would inevitably become endemic. The shock felt during the first year of the global pandemic gave way to a rebound that, in many markets, helped bring the insights activity back to pre-pandemic levels or output.

At a global level, the Insights Industry outperformed GDP growth in Europe, the US, and Asia Pacific, while it lagged behind in Africa and the Middle East regions and the Rest of the Americas (which includes Latin America and Canada). The buoyant +10.8% global net growth registered for 2021, substantially higher than the IMF’s estimation of +6.1% for global GDP, shows the different realities that exist for every country and every region. The net growth of +12.8% for Europe, +11.4% for the US, and +10.1% for Asia Pacific contrast with the more nuanced yet positive growth of +4.2% for Latin America and -3.8% for Africa and the Middle East.

For many countries, however, these promising growth rates were not enough to regain the ground lost in 2020. The regional and country data presented in ESOMAR’s Global Market Research 2022 report shows that recovery from the initial shock of the pandemic has not followed a unified trend. Instead of an ‘L’, ‘U’ or ‘V’ shaped recovery, it is following a so-called ‘K’ shaped one, where countries fare very differently depending on a myriad of economic, social and political factors.

Overall, the industry has expanded substantially and experienced a year of unprecedented growth. 2021 saw the industry expand from US$ 102 billion to almost US$ 119 billion! 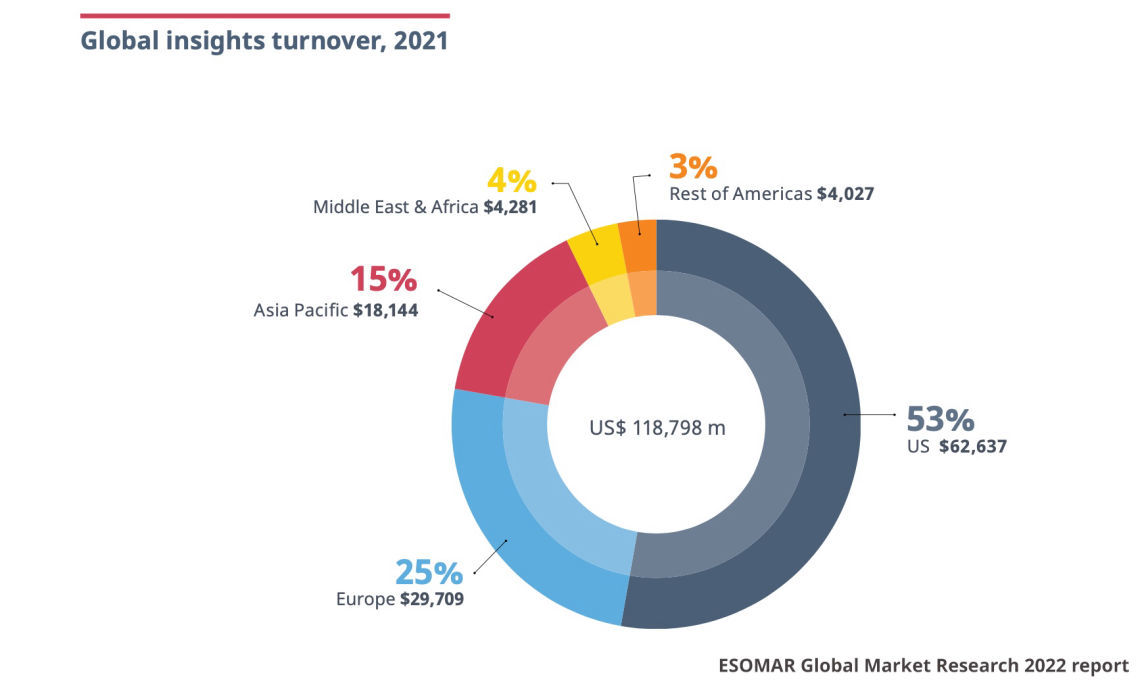 One of the main moderators for growth during 2021, and one certain to play an ever more prominent role in 2022, was inflation. This was particularly true for those regions that showed historically bigger degrees of volatility: the rest of the Americas with a combined 6.25% of inflation over 2021, Africa with 13.24% and the Middle East with 5.33%. The impact is a lower net growth that, in the case of Africa and the Middle East together, becomes a negative -3.8%.

2022 is starting to show the medium and long-term effects of the shock that occurred in 2020. Today, social unrest, political turmoil, high levels of inflation, and disruption of supply chains are the reality many countries have to deal with, not to mention new open armed conflicts. All things considered, ESOMAR estimates that the industry will expand during 2022 by +5.2% in net terms (after expected global inflation of almost 7%).

Three countries or areas of the world have seen their turnover return to pre-pandemic levels: the European Union (EU), the UK, and Northern America. In the EU, all 26 countries (we do not collect data on Malta) surpassed in 2021 their declared turnover for 2019, except for France, Finland, Hungary and Croatia. In Northern America, both the US and Canada reported turnovers above the 2019 level – with growth rates above 15% in each case. The UK also declared excellent growth levels and increased its level of output by nearly US$ 2 billion.

The same cannot be said for Asia Pacific, however. Out of the 22 countries included in this region in ESOMAR’s report, only 8 managed to overcome the shock experienced in 2020: China, India, Australia, Japan, South Korea, Singapore, Indonesia and Mongolia.

Similarly, Latin America continues to feel the reverberations of the pandemic, and no country with a declared turnover above USD 10 million has yet surpassed the 2019 level of output.

Lastly, the situation is analogous in Africa and the Middle East. From those countries that declared their level of turnover over 2021, no country over USD 10 million in turnover managed to report pre-pandemic levels of output. Only Iraq, with USD 5.0 m in 2021 compared to USD 4.7 m in 2019, appears to have eluded a prolonged shock. Tech-enabled methods, the source of growth

The lattice of research methods, first developed in 2020, presented to the international community the conceptualisation of the established and technology-enabled of research, along with the reporting side of the business. While some countries remain unable to quantify the size and characteristics of the tech-enabled sector, ESOMAR continues its quest to bridge this gap at global and regional levels.

Today, we are able to identify the size of the industry that remains “undeclared” at a global level, which last year sat at 17% of global turnover. As countries include in their local surveys a more inclusive definition of the industry their improved measurement will help shrink this gap accordingly. The Global Market Research 2022 report is estimated to cover in its pages the characteristics of up to 83% of the global industry.

Growth within the industry was primarily fuelled by the tech-enabled sector, where an influx of investments paired with promising returns point to a yet unsaturated market and pushes year-on-year net growth globally to +18.9%. The established and reporting sectors, while also growing at an excellent pace of around +5%, get overshadowed by the development of an impressive technology arm. 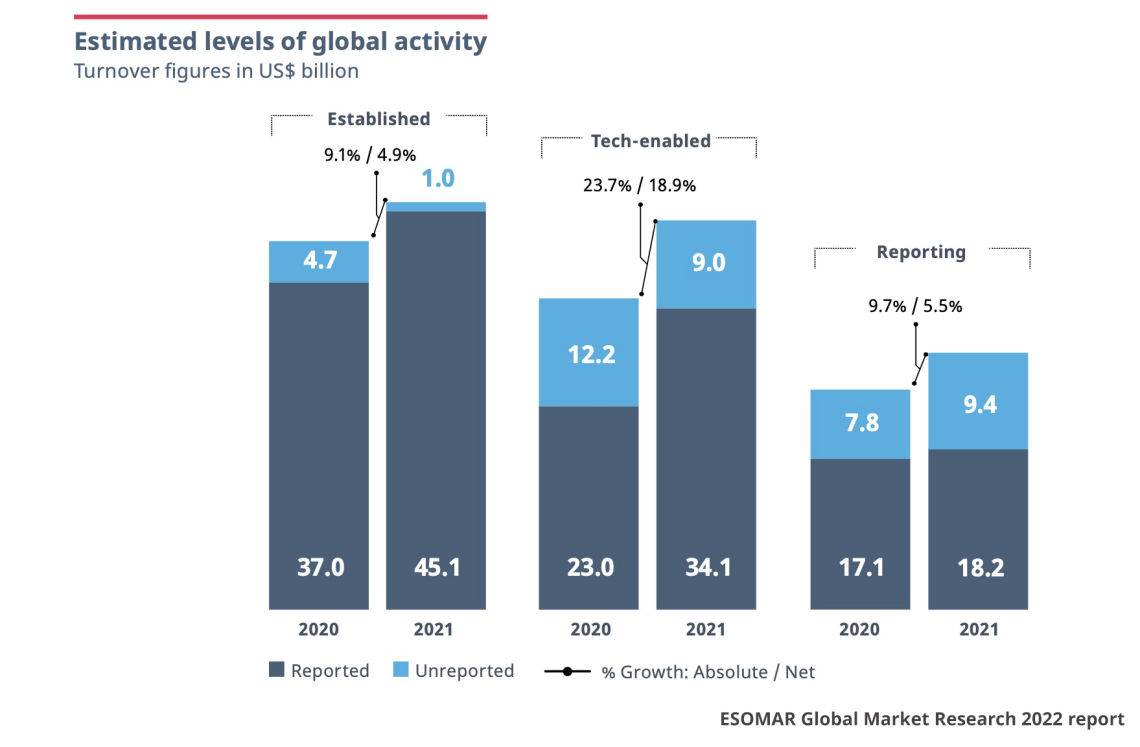 ESOMAR expects 2022 to witness the further expansion of the industry with a global net growth of +5.2%, primarily fuelled by Asia Pacific and Europe, with net growths of +10.4% and +7.2%, respectively. The US will remain the powerhouse of not only the industry but, more precisely, of the entire tech-enabled sector, but the expected high levels of inflation will moderate their expected growth rate to a net +3.0%.

2022 will see an increasing number of countries escape the ‘valley’ in output created during the pandemic. All countries in the EU are expected to declare higher turnover than in 2019, while in the rest of the region, only Georgia, Armenia, and presumably Ukraine will remain with lower levels of turnover.

In Asia Pacific, we will closely follow the developments of Thailand, Hong Kong, and Taiwan, the only markets with a turnover above US$ 10 million where country informants are expected to take longer than 2022 to return to 2019 output. Cambodia, Myanmar, Sri Lanka and Laos are also expected to return to pre-pandemic levels of output later than 2022.

The situation in Latin America will remain equally uncertain, and neither Brazil, Mexico, Peru, or Uruguay expect a return to 2019 levels of turnover. A similar case exists in Guatemala, Honduras and Nicaragua.

Lastly, in Africa and the Middle East, time will tell whether Nigeria, Tunisia, the Democratic Republic of the Congo or Pakistan declare for 2022 turnover levels above those of 2019.

As the consequences of the serious macroeconomic disruptions of the last couple of years continue to sink into the world economy and society, ESOMAR will continue to keep the pulse of the industry and its developments. And perhaps next year, we will have the pleasure of welcoming an industry with an output in excess of US$ 130 billion!

Xabier is Senior Industry Analyst at ESOMAR and coordinates the production of reports, such as ESOMAR's flagship Global Market Research besides analysing global trends within market research, improving established publications and producing new ones to increase the value for our members and the industry. 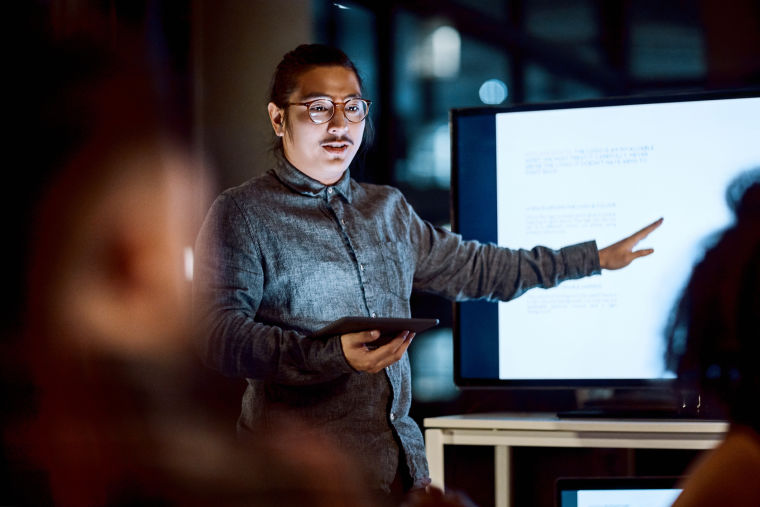 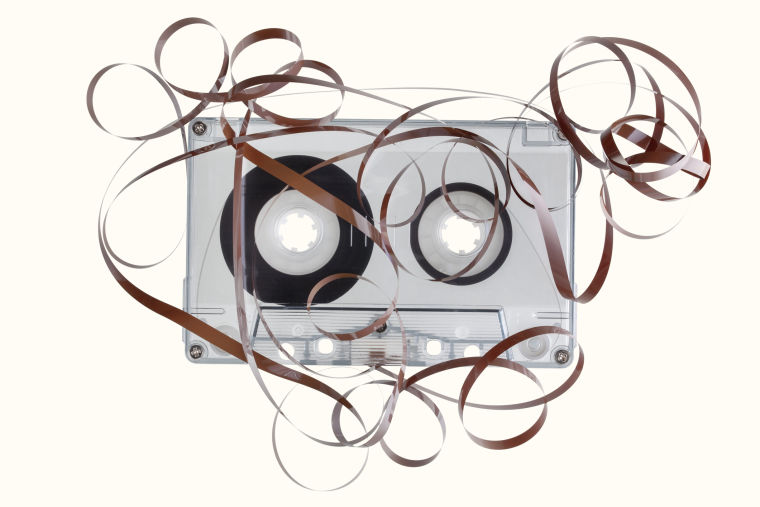 Is the insights industry too complex? The industry in Europe